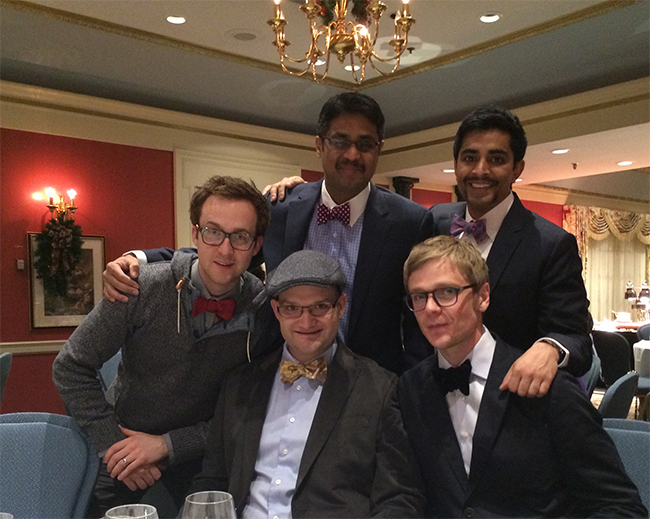 The Bowtie gang at the Palliser hotel for the Neurology winter formal.
It was great to be with my Neurology family at the winter formal. I really appreciate the kind words (and the bottle of Scotch!). My surgery has been scheduled for November 27th.
I have to admit that I am a little nervous. However, compared to the nightmare that I thought I was facing, what’s a little spine surgery, right? I expect to be admitted for about a week. After that I will likely have rehab and a recovery period of 3-4 months. I am hopeful that I will still be able to be a Neurologist one day. I do not think that I have seen my last patient after all.
I have compiled a video montage of my snowboarding exploits at Whistler from when I was a PhD student at UBC. I hope you enjoy it – I really suck at snowboarding. But if I hadn’t crashed and had a dural tear, my life would have taken a different turn. I would not have applied to medical school in the first place, and I would not be a Neurology resident now. Does the Universe have plans for me? Or do I have plans for the Universe? Or is it all just serendipity? I honestly don’t know.
I thought I would end this post with a poem. My Dad reads at least one poem each day, and has many poems memorized. He read this one to me yesterday while we were sitting by the fire. I think it is fitting because I first posted “Whose Body is This” on Remembrance Day. However, this poem runs deeper than honouring fallen heroes. I think it speaks about those who have the courage to stand up for what they know is right. I love the imagery and how it evokes the vastness of space and time. It is comforting to imagine that some sort of cosmic echo may linger after we are gone.
The Truly Great
By Stephen Spender
I think continually of those who were truly great.
Who, from the womb, remembered the soul’s history
Through corridors of light, where the hours are suns,
Endless and singing. Whose lovely ambition
Was that their lips, still touched with fire,
Should tell of the Spirit, clothed from head to foot in song.
And who hoarded from the Spring branches
The desires falling across their bodies like blossoms.
What is precious, is never to forget
The essential delight of the blood drawn from ageless springs
Breaking through rocks in worlds before our earth.
Never to deny its pleasure in the morning simple light
Nor its grave evening demand for love.
Never to allow gradually the traffic to smother
With noise and fog, the flowering of the spirit.
Near the snow, near the sun, in the highest fields,
See how these names are fêted by the waving grass
And by the streamers of white cloud
And whispers of wind in the listening sky.
The names of those who in their lives fought for life,
Who wore at their hearts the fire’s centre.
Born of the sun, they travelled a short while toward the sun
And left the vivid air signed with their honour.