“Today, a great light has been extinguished. The boy from the Transkei has finished his long walk. His journey transformed not just South Africa, but humanity itself.”

Above: Nelson Mandela holds the World Cup. I chose this image because I feel some connection having gone to the FIFA World Cup in South Africa in 2010.

“I have walked that long road to freedom. I have tried not to falter; I have made missteps along the way. But I have discovered the secret that after climbing a great hill, one only finds that there are many more hills to climb. I have taken a moment here to rest, to steal a view of the glorious vista that surrounds me, to look back on the distance I have come. But I can only rest for a moment, for with freedom come responsibilities, and I dare not linger, for my long walk is not ended.”

I am very glad that I had the chance to visit the Transkei, Nelson Mandela’s homeland, in 2010 by motorcycle. (The photo above was taken in the Transkei by Jeremy Bezchlibnyk). Nelson Mandela’s life-long fight for freedom and justice, and his message of reconciliation over retribution, is a message the world should never forget.

To celebrate our graduation from University of Toronto in 2010, Ted, Jeremy, and I rode our motorcycles 10,000 km through South Africa, Mozambique, Zimbabwe, Botswana, and Namibia. We spent several days riding the rugged coastal region of Transkei, which is Madiba’s homeland.

Above: Ted and Jeremy in front of typical dwellings in the Homeland of Transkei, South Africa. 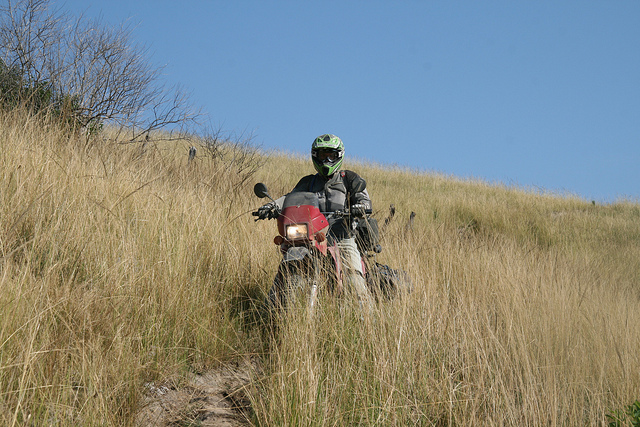 Above: Jeremy riding along the coast in South Africa’s Transkei region. 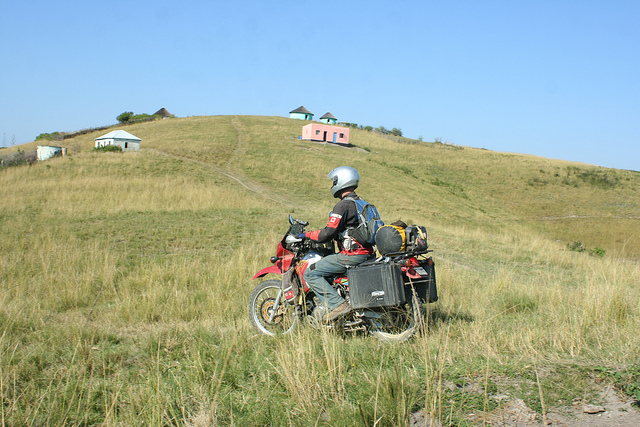 Above: A photo taken by Jeremy of me riding through the wild Transkei.

We also had the opportunity to attend a FIFA World Cup match, 15 years after South Africa hosted the 1995 Rugby World cup as a newly minted democracy thanks to Nelson Mandela’s life-long struggle.

Nelson Mandela used the power of sport to unite a nation. When he donned a South Africa Sprinkboks jersey at the 1995 Rugby World Cup, it was a powerful symbol because these were the colours of his former oppressors. He showed South Africa and the world with that gesture that he was willing to rise above revenge and retribution.

Above: Nelson Mandela presenting the William Webb Wellis Trophy to Francois Pienaar, the captain of the Springboks team after South Africa won the 1995 Rugby World Cup. Francois would later say that President Mandela had thanked him for what he had done for his country. He replied, “No, thank-you for what you have done.”

On a personal note I was discharged from hospital yesterday. I am in some pain, but doing well. My parents have been pampering me. The one advantage of recovering from spinal surgery at this time is that I can watch history unfold over the next several days without being interrupted by my pager going off.

Below is a video showing footage of our motorcycle trip through several countries in Southern Africa, including our trip through Mandela’s homeland, the Transkei.